Rather than manage versions manually, ORCANOS | ALM has a built-in versions management engine, thus allows storing multiple versions views for single text case, or group of test cases, and handle each version separately, and this without duplicating information.

As opposed to the common use of other test management tools, that physically duplicating test cases when project version advances, ORCANOS | ALM system maintains pointers of the previous version (which would act as a baseline), and track the changes in the current baseline. Test Cases information from older versions are kept, and once a test needs to be updated, Orcanos provides a BRANCH option that splits the test case to 2 instances. One in the previous version and one in the current. both instances are linked, so tracking changes is easy.

So, in summary, BRANCHING Test Cases creates an instance of the test cases on the new version while preserving the original as a baseline. BRANCHING also easily manages and searches through test case versions, by setting up a multiple views to query the data.

ORCANOS | ALM  uses both test cases and test runs. Test cases define the set of conditions, actions, expected results, and other criteria used to determine if a product component works correctly and meets its traced, specified requirements. Test cases can change over time to reflect functional changes in your product requirements. Such changes need to be identified easily and reflected on the correct baseline, which goes under testing.

Execution Runs on the other hand, are snapshots of test cases that are generated at a milestone in the testing cycle, such as when a new software release is provided by the development team. A test run contains all information from the related test case, in addition to the results of a specific instance of the test.

So while the test case may change in the future to reflect new user logic modifications, the test run steps that were executed in the past, remain in the history of the execution run, and will never change according to most restricted regulation standards for electronic systems, such as 21 CFR Part 11. By saving test runs, managers and auditors can look back on the exact steps followed during testing years, long after the tests have been completed.

A single test case can have one or more related execution runs such as Functional, Progression, Regression, Load and Stability to mention a few; depending on the test variants defined by test parameters selected when test runs are being executed. For example, should an application support multiple browsers, such as Chrome, Edge, and Firefox variants, these variants can be selected when you execute the test, creating a separate test run for each selected variant. The test runs include identical information, except for the test variant value, which indicates the browser used in testing.

As noted, test cases change over the course of the development cycle. Should  you want to view these changes, you may  select a test case, and then click the Execution History tab to view a detailed change report, including who made the change, when it was done, and what was changed.

Change reports display details of content added to and removed from a test case (or any item, for that matter), each time it is saved. ORCANOS | ALM keeps audit logs of changes according to best practices of  regulated design change management. These reports identify the specific changes made to a test case over time. Change reports are ALWAYS turned on and available for both historical item information logging, and detailed audit trail loggings for test cases. 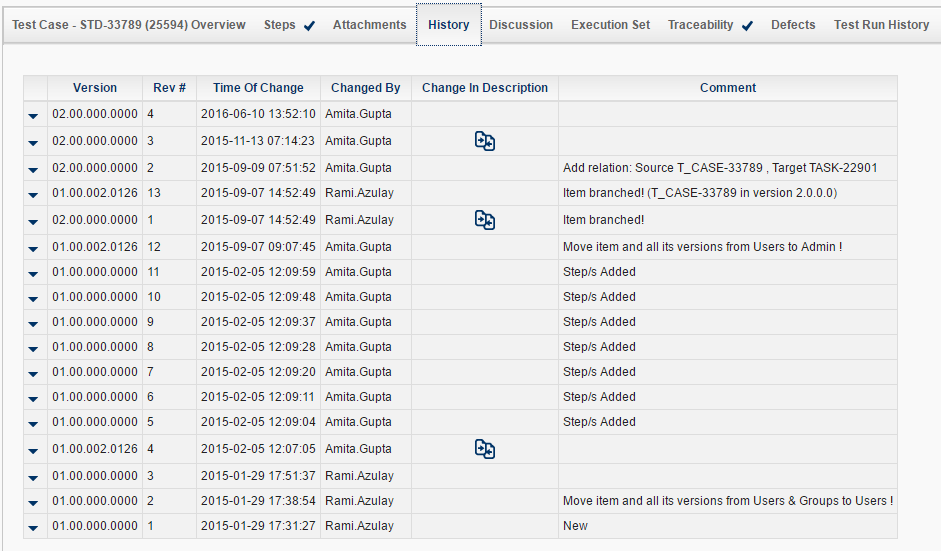 Once you are in the Change Report window, you will see content which has been added or removed from the test case. You can also view the electronic signature in cases where changes are made and signed (in ORCANOS | ALM 2.0 and later), and you have permission to view the audit log, If there is an attachment, a link to it will be visible.

Should you want to add test cases that share the same basic information, ORCANOS | ALM saves time by taking the test to the next baseline automatically. You can then decide if you would like to keep it as it is, make changes,  or just make deletions from that next baseline version. There is no need to duplicate an existing test case and then edit the new test case. Simply select the test case from the next baseline version on the product tree module, followed by selecting Edit Test Case by pressing the Edit button.

ORCANOS | ALM gives you the option to link the altered test case with the original test case into a new execution set. You can also specify the traceability between those test cases to a requirement, and any change to already existing traceability will be managed, based on the baseline it has been associated with.

For example, you might create a “Baseline Test Case” on version 1.0 traced to a requirement in 1.0, then you make changes to that test case in version 2.0. ORCANOS | ALM will alert you that there is a suspicious link needing attention. Allowing you to easily identify and manage changes.

BRANCHING test cases also “copies” information you select from the original test case. Besides the results, all other information including attachments, are always included in BRANCHED test cases. The newly BRANCHED test case now has a new baseline for Execution Run that is kept in tandem with the previous version results. In such cases, you can measure the Feature Maturity by looking at the history of the test over executed version, and see that it gets stable. History of the test will be kept through both version 1.0 and 2.0 at the same audit log, as well as file attachments, links, and more, from the original test case.

The ORCANOS | ALM view designer can be used to easily manage and search through different versions of test cases. In the View dialog box, simply select “test case” from the dropdown list, to add specific criteria to the view by selecting the field VERSION, and use the operands to search the data as you wish.

You can use this field criteria to identify the test case version for which each test case is valid, and make it visible at a glance in the test case list window. In the example below, you can see test cases and their version, as well as identify whether they were BRANCHED or not. You can also see the traced requirement of that test case. 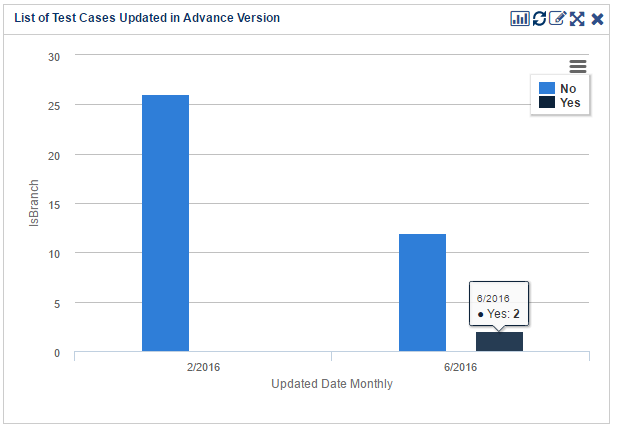 In this example, the user has also displayed the column for Version Baseline Test Case Traceability relations links, enabling you to see which test cases are linked. Clicking on the blue bar links directly to that traced item.

When the 3.0 update is released, ORCANOS | ALM will advance the project, and automatically all test cases from version 1.0 and 2.0 will be available and will be managed separately. Any current test case that does not change, or does not need an update, will keep its original version. If a test case does need an update, the user would add that test case to Execution Run built into version 3.0, without duplicating the test case, Execute the test cases, and it will be marked as valid for 3.0.

Creating a general custom field,  allows you to filter by many other attributes and creates KPI measurement on your overall productivity. ORCANOS | ALM enables email notifications about changes based on product version, enabling field-level security, and more.

Folders are another option for managing test case versions in ORCANOS | ALM. Check out the online support and learning resources at www.orcanos.com for more information.

We use cookies on our website to give you the most relevant experience by remembering your preferences and repeat visits. By clicking “Accept”, you consent to the use of ALL the cookies.
Do not sell my personal information.
Cookie settingsAccept

This website uses cookies to improve your experience while you navigate through the website. Out of these, the cookies that are categorized as necessary are stored on your browser as they are essential for the working of basic functionalities of the website. We also use third-party cookies that help us analyze and understand how you use this website. These cookies will be stored in your browser only with your consent. You also have the option to opt-out of these cookies. But opting out of some of these cookies may affect your browsing experience.
Necessary Always Enabled
Necessary cookies are absolutely essential for the website to function properly. These cookies ensure basic functionalities and security features of the website, anonymously.
Functional
Functional cookies help to perform certain functionalities like sharing the content of the website on social media platforms, collect feedbacks, and other third-party features.
Performance
Performance cookies are used to understand and analyze the key performance indexes of the website which helps in delivering a better user experience for the visitors.
Analytics
Analytical cookies are used to understand how visitors interact with the website. These cookies help provide information on metrics the number of visitors, bounce rate, traffic source, etc.
Advertisement
Advertisement cookies are used to provide visitors with relevant ads and marketing campaigns. These cookies track visitors across websites and collect information to provide customized ads.
Others
Other uncategorized cookies are those that are being analyzed and have not been classified into a category as yet.
SAVE & ACCEPT